Trump a fascist? Well he certainly has a neo-Nazi fanbase... 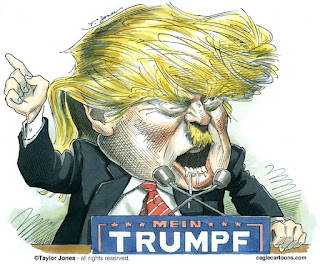 It’s reckoning time. A few weeks in and even those of us who thought it couldn’t be bad – well, it can. It is. How could it be any worse? Flagrant racism, bumbling autocracy, Twitter diplomacy – and God Knows What to come.

But a fascist fan base – well, that’s much clearer. We all know that Trump was endorsed by the Ku Klux Klan, something that’s pretty disturbing in itself. But it goes deeper than that. The Alt-Right communities that spurred his success online have certainly got roots in neo-Nazi thought – less “alt” right than “far” right.

They may have ways of hiding it, though. And here’s how.

Take the idea of “human biodiversity” floated by some prominent bloggers. At first it sounds like a term from the left: an inclusive approach to human difference, perhaps? But human biodiversity is really just a new way of dressing up eugenic racism – an unpleasant bit of pseudo-science aimed at dividing and “classifying” humanity into clear, well-defined groups based on skin colour, population difference and racial hierarchy. (Or “racism in a lab coat”, as the Baffler magazine put it).

Because Twitter and the like have hate speech policies in action, many online hatemongerers found a novel way to spread their ideas: using three parentheses on either side of a name to indicate someone of Jewish origin. This social media answer to the “Juden” Nazis used to paint on the doors of Jewish families ultimately proved, like Trump’s words, largely unpoliceable (there is nothing obviously offensive about parentheses, to either human or algorithm – so they’re nearly impossible to remove systematically from the platform).

This “closed captioning for the Jew-blind” as one white supremacist gleefully put it, successfully “outed” a number of online journalists in targeted hate campaigns which sought to mock Jews or expose supposed Jewish collusion in controlling media or politics. It served as a flagging device for other anti-Semites, and led some writers to experience death threats, anti-Semitic cartoons, home phone calls and delightful memes (like the photo of the gates of Auschwitz with the “Arbeit Macht Frei” slogan replaced by “Machen Amerika Great.”)

The offenders have since developed their dark “netiquette” further with a kind of Turing replacement-code where innocuous words – “googles,” “skypes,” or “yahoos” for example – stand in for racial slurs. The result are tweets like “Chain the googles / Gas the yahoos” or “If welfare state is a given it must go towards our own who needs. No Skypes, googles, or yahoos.”

Such obvious race-hate is an ugly thing to encounter anywhere, but it’s far more frightening when the techniques it employs are adopted by those seeking political power. Trump is well-known for his attacks on opponents, but what’s less well observed is the underhand meanings implicit in some of those attacks. He tweeted a meme about “Crooked Hillary” which featured her face and the words “Most Corrupt Candidate Ever!”. This slogan appeared in a little coloured star which at first sight looks like standard desktop publishing style. The star, though, was the Star of David, and a giant pile of atop a giant pile of money: the insinuation is not so very subtle.

Elsewhere he talked repeatedly of “global special interests”, another dog-whistle term that sounds conveniently vague to the outsider but is all too specific for those in the know (as Will Drabold put it in Mic, “Donald Trump says "global special interests." Anti-Semites in the alt-right hear "Jews."”).  Always keen to attribute his sources, he once even openly retweeted something from WhiteGenocideTM, a user fond of white nationalism and neo-Nazi imagery, in an unintentionally surreal message that manages to mix petty jibing with a nod to the swastika brigade:

@WhiteGenocideTM: @realDonaldTrump Poor Jeb. I could've sworn I saw him outside Trump Tower the other day!

It got over nine thousand Likes.

The extent, the potential, the possibilities are still unknown to us. But someone who can retweet someone calling themselves White Genocide is either exceedingly stupid or at least sympathetic to fascists. Right now it looks like both could be possible.
Posted by Dale Lately at 07:41