Labour – slightly less shit than the other ones! 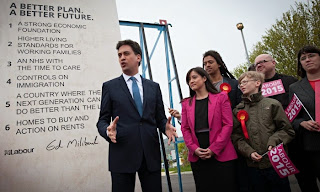 When Russell Brand recorded a five minute interview with the Labour Leader last week it said a lot about our times. Not just about politics-by-media, of course, or about celebrity power to act as kingmaker – but a somewhat depressing irony: that to retain some influence, the most powerful man in leftist politics now has to associate with someone like Ed Miliband.

Ah, Labour. What happened? Remember back to 1997, that landslide? No? Christ, you were just four years old. Well, it was a magical time; it was a wonderful time; it was a time when children sang, old ladies danced, and the –

Actually it wasn’t all that great. Politics, though – that was really good. That Labour landslide! Who could forget the excitement as we watched a country emerge from two decades of eroded freedoms, Tory benefit cuts and privatization into a brave new era of eroded freedoms, benefit cuts and privatization under New Labour? People believed in the whole thing back then.

Not like now. "We're not great," runs the Labour defence now, "but come on - who else do you want to see elected?" Now that's an inspiring platform. In a terminally hung parliament, you’re a terminally “hung voter” and the result isn’t policies but last-minute promises, the kind you might make to a pissed-off girlfriend after you’ve forgotten your anniversary. This’ll be remembered as the election of “flexi-manifestos”. Want free school lunches? How about 20 billion off the budget? It’s like watching a failing clown at a child’s birthday desperately throwing out sweets to placate the toddlers. Catch.

And voting becomes game theory, packed with counter-intuitive outcomes. Vote Labour and the Tories will probably get in; vote Tories and the SNP will probably get in; vote Liberal Democrats and the Japanese Yakuza will get in. So confused am I by now that I half suspect that if I walk in to the booth and put a cross next to the Green candidate for South-East Manchester I’ll inadvertently elect Nigel Farrage.

Now, I’m probably closest to Labour in my bones, but even I have to try pretty hard to like Ed Miliband. Put that staggering charm deficit aside; just look at his behaviour. Why’s he spending so much time in parks? Who are all these voters who’ve supposedly come up to him to start conversations? Labour or not, if Ed Miliband struck up conversation with my daughter in a secluded place in the hope of a soundbite, I’d have him arrested.

You might laugh, but the only English leader left I’d actually vote for is Nick Clegg - who I dislike as much as I dislike most politicians (though I do think he’s got potential as an autotuned pop star). But here’s the brilliant thing about Nick Clegg: he’s a hypocrite and he knows it. None of that carefully massaged press apology for him, none of that media misdirection. He can’t wriggle out of it. He lied.

He lied – and so Nick Clegg represents something we’ve forgotten how to value. Pure, unadulterated hypocrisy.

We live in a landscape that’s systematically devalued hypocrisy. Political debate has become a huge lie-detector test, with the interviewer cast as a flimsy amateur DCI as they attempt to prove that the exact words / opinions / thoughts of the interviewee bear some tiny discrepancy with the exact words / opinions / thoughts of the interviewee from 5 or 10 years ago. The result is that politicians spend their days in an endless cycle of arse-covering, never daring to make a definitive statement lest it be retracted afterwards. Public debate becomes the “survival of the least quotable”, with politicians reduced to smug, media-smoothed robots. Slot machines for tweetable soundbites.

Now, I haven’t achieved a lot in my life, but I am rather proud of my hypocrisy. I’ll sit in Starbucks skimming through lefty opinion pieces about the evils of multinationals. I’ll go to trendy cafes and imagine machine-gunning the poseurs I see tapping out imaginary novels onto laptops, then get out my own laptop and start writing it up as a scene in my new imaginary novel. I’ll get indignant about the “voice of the people” being ignored in modern society, and then get equally uncomfortable when the “voice of the people” votes UKIP.

People think hypocrisy is easy. It isn’t. Real hypocrisy takes work and commitment. You’ve got to trust to the weakness of your own convictions, to engage in complex mental manoeuvres simply to reconcile the divergent strands of your personality. The big parties have a lot of personalities to reconcile, which is why they seem more hypocritical. In contrast those at the fringe - take mop-haired pantomime star and occasional Mayor Boris Johnson and boozy, friendly racist-next-door Nigel Farage - are seen as more "real", "authentic", because they'll "call a spade a spade", or possibly much worse than a spade. If they’re going to be our markers for integrity then give me a hypocrite any day.
Posted by Dale Lately at 03:58