"Staycation"? Possibly the most outrageous rebranding exercise since Auschwitz held a "bring your child into work" day 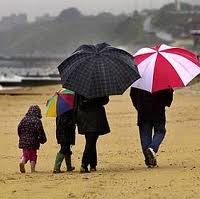 Britain does a lot of things well. It does trenchant irony, video game design and cupcakes well. Better than Spain in fact. Weather, however, is not one of our talents. Most of our skies resemble God in a bad mood; just looking up is like being hit in the face by the opening scene of an Ingmar Bergman film. Now that the British "summer" is upon us and we can look forward to long, light days full of gusting wind and drizzle, we can also expect a sea of Sunday supplements trumpeting funky "staycation" suggestions for anyone struggling to stump up the twenty quid for a Ryanair ticket. Take the brochure for the Great Orme 'Ancient Mine' in coastal Wales – essentially a large hole with ambitions. ‘Stonehenge is certainly a world class monument,’ it generously allows, ‘but now it is joined by the Ancient Mines on the Great Orme.’ Elsewhere the King Edward Mine’s buildings are Listed ‘Grade 11’, meaning they are of ‘national importance’. On this kind of scale I think our bathroom lime scale probably ranks at Grade 15.

Scrape the barrel and what you find there half makes you sad, and half makes you shake your head in disbelief. ‘Enjoy a 30 minute tunnel trip,’ said one I’d found for Standedge Tunnel in Yorkshire, ‘while one of our entertaining guides explains all about the geology and history of the tunnel, as well as thrilling you with tales of the folks who designed, built and worked in the tunnel.’ Alternatively you could just drive beneath the Thames at Blackwell for free. This isn't tourism. It's tour-isn’t.
If these are the minimum standards, it occurred to me, there would be nothing to stop an enterprising fellow like myself from setting up my own ‘Garden Shed Experience’. 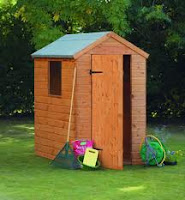 Any takers? Ah, come on. At least you'll save twenty quid on a Ryanair ticket.