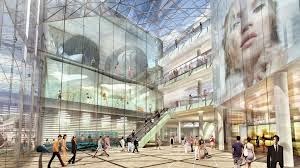 Can literature survive the consumer age? Acclaimed Glasweigan author Ewan Morrison answers that question by giving fiction itself a reboot: in Tales from the Mall, observations around the history of shopping are woven together with short stories to create a compelling meditation on contemporary society.

Here the mall – more a generic idea than an actual place – serves as a human cross-section, taking in young and old, locals and newcomers alike. Thus we have the hapless I Dunno Dave, Starbucks junkie, on a bittersweet NLP self-help ‘mission’ to the mall to get a girl’s phone number; we see the jobless advertising exec in her forties attempting to save a disintegrating relationship in a powerful account of ageing in an increasingly youth-driven world, or the former Soviet Union émigré attempting to adjust to life in a western city centred around shopping. Confusion, insecurity and alienation thread their way through all their lives.

Morrison’s skill lies in his ear for natural dialogue, his human empathy, and his facility for teasing out the fears and conflicted desires that drive human behaviour. A sense of powerlessness permeates the stories, which are sometimes horribly funny – as in the tale of the scabrous, racist ‘Rena the Cleana’ whose bigotry inadvertently saves a suicide case – but often very sad, too, like the pensioner escorted off the mall’s premises for the crime of consuming an unpurchased snack. Perhaps most interesting of all though are the non-fic accounts of consumer manipulation (did you know that shoppers are corralled using techniques originally developed for cattle? Or that the most expensive display space in the complex is the panel opposite the ladies’ shoe shop – ‘windowlicking’ raised to spatial science?)

Tales from the Mall is best when it evokes the terrifyingly ‘liquid’ condition of modern life, where the modern citizen is encouraged to eschew traditional bonds and roles in favour of shopping around for something better. As such, it’s a trenchant comment on the effect that contemporary capitalism has on us all – the ‘mall without walls’ that increasingly serves as a model for all our social relations. The book ends by evoking the mall as junk space, an airless and disembodied limbo, with a character selling spec apartments inside it barricaded against the poverty and riots outside – but for how long?

That, along with much of the rest of the book, serves as an indictment of a society that puts malls at the centre of civic life. If only all novelists were as keen to peel back the brand names and find the stories beneath.
Posted by Dale Lately at 03:09