It’s probably symbolic of like, colonial repression and stuff 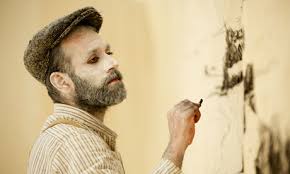 Painting on the side of a tent

‘Why’s he painting on the side of a tent?’ I said, pointing at the man who was painting on the side of a tent.
The girl who worked in the art gallery looked up.
‘It’s part of the Manchester International Arts Festival,’ she said. ‘He’s making a comment on, like, the connection between Asian industrialisation and Manchester’s manufacturing past.’
‘Is he?’ I said.
‘Yeah,’ she said.
A few people wandered around, looked at the man, then looked at the side of the tent he’d painted.
'How?' I said.

'How what?' she said.
'How's he making a comment on the connection between Asian industrialisation and Manchester’s manufacturing past?’
There was a pause.
‘I dunno,' she said. 'It's symbolic.'
'Oh,' I said. Someone took a photo. 'Symbolic of what?'
'What?' she said.
A guy with a camera beside us started filming.
'What's it symbolic of?' I said.
The girl didn't answer. Together, we watched as the man painting the side of the tent stopped painting the side of the tent, yawned, and walked over to a small, shitty mattress.
'It's symbolic of like, colonial repression and stuff,' she said.
'Oh,' I said.
The man started going to sleep. Someone took another photo.
'He's a famous artist,' the girl added, as the man began snoring.
'Right,' I said.
Neither of us could think of anything to say. People started leaving the gallery.

‘Besides,' said the girl, 'to be honest, what else is he going to do?’
I didn't reply.
Someone took another photo.
Posted by Dale Lately at 01:20