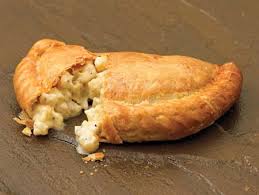 Gregg’s cheese and onion pasties
A volcanic hunk of gristle that tastes like a brick of processed cheese fed through a chemical sludge pipe and inevitably burns the top of your mouth off, which means you end up gingerly teasing little bits of it into your gob like you were a porn-star trying to arouse the viewer with the sight of you eating a big fat turd made out of grease.

Constant and pointless reminders that the podcast is on a website, when you’ve just downloaded it from that website
‘You can find this and other podcasts on the BBC website,’ the voice tells you. ‘Just go to bbc.co.uk.’
I know. How the fuck else do you think I got this shitting podcast? Why do you have to keep telling me, you pricks?

David Cameron’s “green” credentials
“I want this to be the greenest government ever,” David Cameron once said - a guy who spent the five years before being ‘elected’ (or, if we want to nitpick, ‘not being elected’) running around with a rhetorical watering-can trying to make the Tories look caring.
Here are just some of the resounding achievements of Cameron’s leadership in the environmental sphere:

The shitty doors on Virgin Trains
Which never open when you want, meaning that you have to punch your way through the entire train as if you had anger management issues and were only taking the sodding train because you liked beating up small electronic buttons.

Julian Lennon
In the plaza of the new yuppiedrome ‘Liverpool One’ complex, a bit of sculpted public art bears an inscription quoting the son of the famous Beatle. ‘Dad once said to me that should he pass away,’ it says, ‘if there was some way of letting me know he was going to be okay… The message would come to me in the form of a white feather.’
‘Then… When I was on tour in Australia,’ it continues, ‘I was presented with a white feather by an Aboriginal tribal elder.’
So there you are: the mystical insights of the oldest continuous civilization on earth are utilized to speak to a poshboy millionaire touring his shitty vanity project around a desert.
Posted by Dale Lately at 13:50