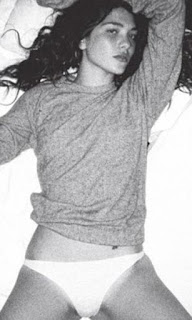 ‘Our models are real girls who are often employees or friends of the company,’ announced edgy retailer American Apparel the last time it was criticised for using startlingly young looking models in explicit poses in an ad campaign, something they found themselves in trouble for recently once again. 'They do their own hair and makeup and aren't Photoshopped. From time to time people are made uncomfortable by this, and it occasionally causes an unfortunate reaction.’

Which evidently shows just how far we uptight Brits have misunderstood their vision. While they might have looked like predatory profit driven marketers peddling a kind of quasi-child pornography to lend an ‘edgy’ look to their products, they’re actually liberating us all from the tyranny of those plasticky Photoshopped models. A bit of reality. That’s good, isn’t it? After all, what kind of uptight prude could possibly label this 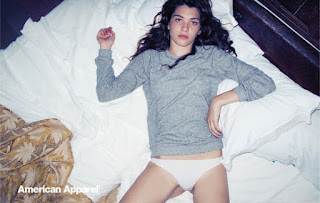 as ‘pornographic, exploitative of women and inappropriately sexualised young women’, as the stuffy old Advertising Standards Authority would have it?
You see, according to the hipster-targeted retailer, these are the kind of ‘real, non-airbrushed, everyday people’ that ‘normal people can relate to’. They’re the kind of images ‘people regularly share with their friends on social networks’. Nothing wrong with that, is there? I’m on Facebook, and I don’t think any of my friends on there would think anything odd about someone passing around a photo like

that. True, you could say that stripping girls who look about seventeen and photographing them in their underwear for commercial purposes is the kind of thing which might get some people landed in prison, or at least get them a reputation as exploitative quasi-pornographers. You could say that a company that asks potential employees to submit full body shots of themselves before they’re taken on, that’s plagued by sexual harassment cases, and owes $121.5 million to Lion Capital and Bank of America because their sneering, faux-hip, looks-obsessed brand is starting to look a bit – well – eugenic, deserves everything it gets.
But only prudes would say that! You can’t call American Apparel ‘exploitative’ just because they’re exploiting people; they’re just part of the liberated entertainment industry that's empowering girls by stripping them and taking photos of them. After all, could there possibly be anything more empowering and liberating than