Urban Outfitters? It's like a hard-drugs version of Accessorize 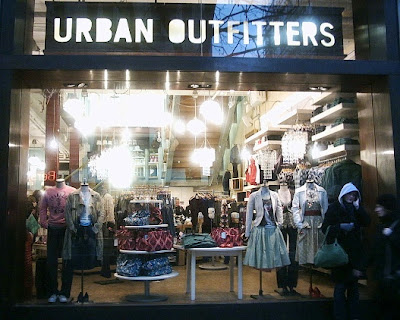 Here are just some of the essentials the style-conscious hipster can pick up in Urban Outfitters:

·       a mug that accuses you of being a ‘coffee slut’
·       some hip flasks with the injunction to ‘fuck my liver’
·       a book that says ‘This is not a book’ on the cover
·       a pair of retro ‘Vans Classics’ sneakers placed on a stone plinth like they were fucking Mesopotamian carvings on display at the British Museum
·       human hair from one of the less famous Nazi concentration camps, woven into a novelty pillow celebrating the 1981 Nintendo 'Donkey Kong' classic (this isn't actually true)
·      a bathtowel decorated with pictures of worryingly young naked girls, which isn’t illegal, because it’s being ironic
·      another three floors of worthless posturing shit displayed with astonishingly high prices you’d have to be a dribbling moneyed scumcake to even contemplate buying

Security guards with radios, trainers on museum-plinths, Guantanamo indie blasted out so loud it makes your ears cry - the minute you walk in you know that this isn’t so much a shop as a prison camp for the terminally cool. Certainly it's hard to see the difference between most of the stuff in here and your average car boot sale, except that it costs twenty four times as much as you feel it should and somehow lowers your legitimacy as a human being if you purchase it.

I couldn’t imagine wanting to ‘outfit’ my apartment here – not unless I was a millionaire cokehead reupholstering a Hoxton wankpad in the middle of a nuclear apocalypse – but I did at least learn one important axiom of twenty first century retail: that you can put any old rubbish in a deep brick recess under cold strip light and declare it a must-have. You’ve got to hand it to Urban Outfitters. They could make turds look cutting edge.