The End of the World - a Local Perspective

A "Coronadventure" in Three Parts 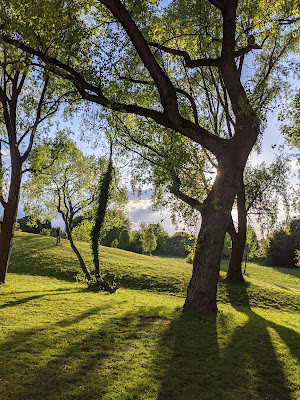 For the final part of my ‘Covid Trilogy’ I decided to concentrate on home – and attempt to document the city I actually live in.

A bus thick with evening heat took me to the airport, where today’s arrivals included flights from Doha, the Isle of Man and a delayed afternoon flight from Islamabad. One of the interesting dimensions of the pandemic was that normally interesting places were now boring, and normally boring places were now interesting; train stations, for example, had become ghostly militarized zones full of distant shuffling employees, long silences, and teetering unread piles of the Metro. Ironically they were actually more pleasant than before the pandemic. 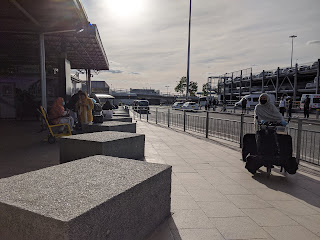 The Departures hall was whisper-silent: an empty shell scraped by slivers of sunlight, long evening shadows and a distant air-conditioner hum that reminded me of the exploratory gurgles of a recently-purchased fridge. Beggars bedded down on the carpet amongst the upbeat marketing promotions. If this city were to descend into some kind of Mad Max Armageddon, the warring tribes would end up massacring one another against a backdrop of posters from regional funding bodies about diversity and inclusion.

In the Departures hall a single attendant stood behind a single desk; half of the room had been plunged into darkness to save on electricity bills. Arrivals had been cleared of any stragglers, so those waiting to pick up their families had been confined to the grand, sun-baked ziggurat of the Terminal 1 Short-stay Car Park. 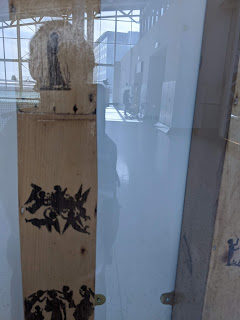 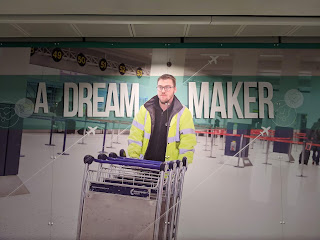 
As I set off on the second day of my journey around my virus-stricken city I received a text from my local GP practice asking if everything was okay. 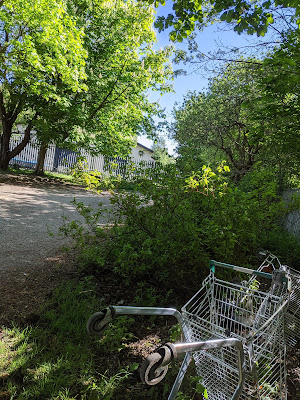 A shopping trolley that someone had helpfully left in the beauty spot beside my local reservoir seemed to rear up as I approached, as if it were begging for scraps, its hind legs gleaming in the afternoon sun. The cycle path was full of hundreds of people self-isolating; there were so many that my journey became a torturous gauntlet woven between wheezing families and their increasingly indignant dogs.

The recycling containers seemed especially colourful and gleaming outside my father’s house in Chorlton, as if they were looking forward to swallowing the pile of leftwing magazines my father was putting in the bin. 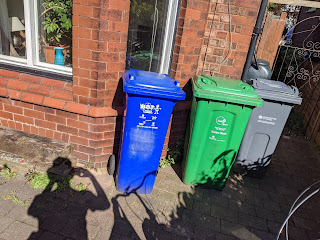 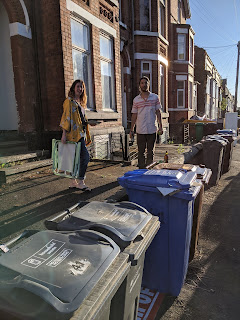 I dropped in on my friend Adam, who told me he was planning to get into self-sufficiency gardening in order to shore himself up against the potential collapse of civilisation. He was looking well – in good spirits as he popped open a couple of beers – and declared that he had that very morning taken delivery of a thousand litres of compost.

Deckchairs were arranged in the garden at a suitable distance from my friends, and we chatted amiably while the next-door neighbour lifted weights to a series of metal bands. As we talked a head emerged from a window above us, and I recognised a man called Dan who I knew from local parties.

We chatted for a couple of minutes, and Dan revealed that he had spent a brief time in the local park that morning to get a bit of fresh air. 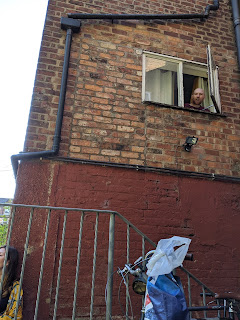 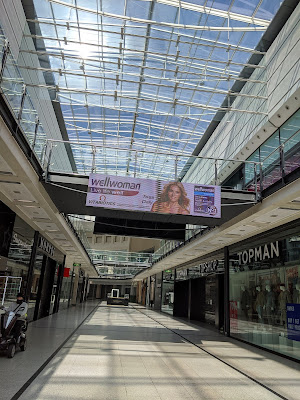 On the third day of my adventure, I decided to negotiate the city’s shopping mall, a place where in less afflicted times I spend much of my daily life in the bookshop café. The mall was ghostly in its silence; beautiful sun bathed the complex in dappled light, so that one felt like one was moving in a kind of meditative trance, even if technically one was actually only moving towards the Prêt-à-Manger. 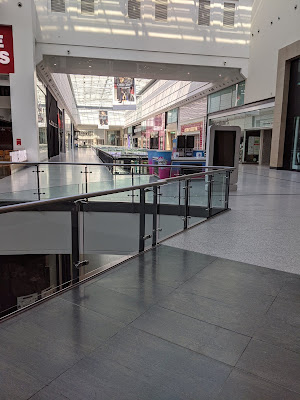 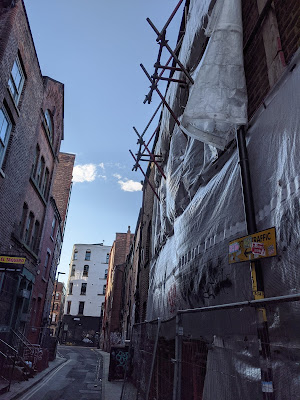 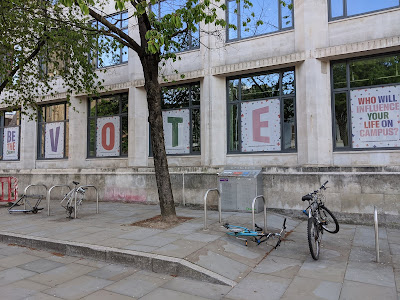 I stopped and purchased a carton of Medium Fries from an establishment called ‘Dixy’s’, and took them into the adjacent park to consume on one of the benches. The park was drenched in evening sun and the fries were even tastier with liberal sprinklings of salt; how remarkable, I thought to myself, that a scene of such Sylvan beauty could sit fifty yards away from a Wetherspoon’s! 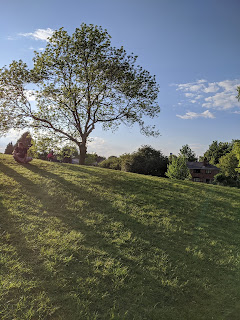 As I made my way around the park I couldn’t help feeling that this place had never looked more peaceful, with its scampering children and playful families. Perhaps this outbreak might lead us on a new path, I reflected, one where we became less reliant on intensive global supply systems and and began to accommodate ourselves to our delicate planet; I began to feel a cautious hope for humankind and our long journey ahead, before cycling back home past a building site where work was resuming on expanding our neighbourhood Tesco Extra. 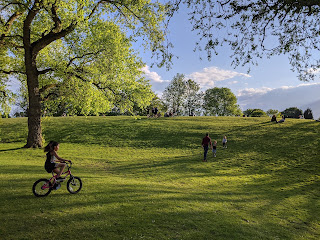