Dale goes to a fascist rally 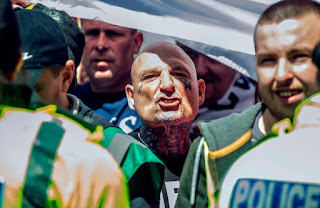 ‘On the 2nd September we will hold a demo at 1pm in Keighley and afterwards we will head to Bradford and demo there aswell,’ said the post.

I write about cities and communities for lefty publications like The Guardian, but it occurred to me that I'd never seen any of this with my own eyes. I'd written about fascism - but I'd never seen fascism. Not only were the EDL going to be there but also their enemies, the ‘Antifa’ (Anti-Fascists), as well as something called the ‘MDL’ (Muslim Defence League). It sounded like a bit of a punch-up.

Was I going to be okay? What should I wear? It was an odd question but one that was eminently worth considering if I didn’t want to get my head kicked in. How do you dress for a fascist rally? Should I wear a suit? Or go for smart casual? ‘You must wear a hi vis and a bona fide press badge,’ a friend stressed. Another suggested blue jeans.

I looked through my wardrobe. I didn’t have any blue jeans. All my jeans were black and frayed and originally from Top Shop. They looked like the kind of jeans a fascist would hate. Why were jeans from Top Shop less acceptable to fascists than blue ones? I was increasingly feeling a bit of my depth.

I decided to put the question of what I should wear out to Facebook.

‘Princess Diana fancy dress,’ added another. I got the feeling my friends weren’t taking this entirely seriously. In any case on Saturday morning it seemed like the rally might be cancelled anyway. Different websites suggested different things, and the Facebook pages for the different factions of the EDL were poorly updated. Most of them only had a few followers. Fascists are less well organized than they used to be, I thought to myself. When I got to Manchester Victoria station I thought about getting a big Starbucks, but decided against it. Somehow walking in to a potentially violent racist rally with a grande latte didn’t seem quite right. Instead I hadn’t phoned my mum for a while, so I gave her a ring on the train.

‘Why didn’t you let me know you were going to an EDL protest,’ my mum said. ‘I’d be quite interested in going.’

‘How do you mean, you’d be interested in going?’ I asked, suddenly worrying that my mum was turning into a fascist. My mum votes for Jeremy Corbyn and lives in Hebden Bridge, and has never shown any inclinations in this direction.

‘I’m not turning into a fascist,’ she said. ‘I meant cheer on the other side.’

I tried to imagine me and my mum going to the EDL protest. We generally meet for cups of tea, me and my mum. We’d even been past Keighley in the car recently, so it wouldn’t have been different to one of our usual days out, except that we’d have been watching violent white supremacists throwing things at riot police. Would we also have got a cup of tea and had a chat? It would have felt a bit weird.

‘To be honest, I didn’t really envisage taking my mum to a fascist rally,’ I said.

As we approached Bradford Interchange – the station I always used to pass through to visit my gran – I began to feel nervous. Was I really going to be okay? ‘There will be literally 6 people surrounded by 400 'anti fascist' twunts and 200 cops,’ someone had commented on Facebook. ‘You are more likely to be seriously injured by standing on Lego.’ I hoped they were right.

By the time I walked down into the city the police were massing in Bradford’s central square. I eyed them with curiosity. They looked up eagerly when I eyed them in the hope that maybe I was a fascist. Then they realised I wasn’t and looked away again. It was still 40 minutes before the rally was supposed to start. I couldn’t see any of the EDL, or the MDL, or the Antifa. All I could see was loads of families splashing around in the big paddling pool.

‘Maybe they’re just a bit late starting,’ I thought to myself.

I decided to go off and get a McDonald’s. I’ve known Bradford ever since I was a kid. I used to come here with my family to play on the Magic Carpet ride in the Photography Museum. The city had always seemed like quite an okay place on the whole – grand Victorian buildings, neo-Gothic shopping arcades, things built in the rich days of the wool trade – but it had certainly has an uneven history. The city experienced race riots back in 2001; it was one of the cities where copies of Salman Rushdie's The Satanic Verses were burnt, and it combines one of the most mixed populations in Britain outside of Tower Hamlets with high unemployment and a struggling economy. Infant mortality is double the national average.

When I got back the police were still standing there, waiting. I still couldn’t see any rioters.

‘Maybe the fascists are in Wetherspoons,’ I thought to myself.

I went in. There were a couple of wedding parties around, but I couldn’t see any EDL. It occurred to me that in any case I didn’t really know what a contemporary fascist would look like. Surely they wouldn’t all be skinheads, like the type that I used to brush up against when I lived in Poland? A guy was sitting near me on his own with shaven hair and a serious look, gazing out of the window at the ranks of police. ‘Maybe he’s a fascist,’ I thought to myself. I watched him for a bit, but he didn't do anything. If he was a fascist he wasn't a very active one.

Outside I waited around the paddling pool for another hour or so, but nothing happened. Kids splashed; adults chatted. I talked to a newly-arrived Indian guy for a while. Eventually I went over to talk to the police.

‘You missed it,’ the policeman told me.

I wandered glumly away. I was glad that the fascist rally hadn’t taken place here, but also a bit pissed off that I’d come all this way to watch people sitting around a paddling pool. Maybe I was wrong, but I was starting to think that fascism – actual, obvious fascism – might be a bit less widespread than articles by Owen Jones tended to suggest. That doesn’t mean it isn’t a worrying trend. Mein Kampf has just been reissued to sell-out runs. In places like France and Holland and Eastern Europe neo-fascist attitudes are anything but hidden. The far right have serious clout in the polls.

But in Britain, here, right now? For all the talk of the resurgence of fascism it sometimes seems awfully hard to catch a real one. I know that far right rallies have been taking place across Britain. But does that really represent more than a lunatic fringe? When Britain First - a 'party' with more Facebook likes than the Conservatives - can barely muster 100 people? When UKIP seems to have collapsed? Of course a nasty undercurrent of racism exists in modern society, the kind that's seen a spate of Islamophobic hatecrime in the last couple of years - but I'm not sure it's ready to break out into fisticuffs.

Here's the thing. I've studied and written about this subject for a while now, and I actually think Britain’s better at getting on with itself than many give it credit for. Fascist rallies are the exception to daily life. So are violent religious extremists. An EDL rally or a bomb in Manchester don’t represent the way most people think and feel, because most people don’t want Christian-flavoured fascism or violent Wahhabis dictating their world. Most people just want a quiet life. To get along with those around us. All we need, in the end, is a big enough paddling pool.
Posted by Dale Lately at 03:15