Slavoj Žižek? Be honest, you don't understand him either 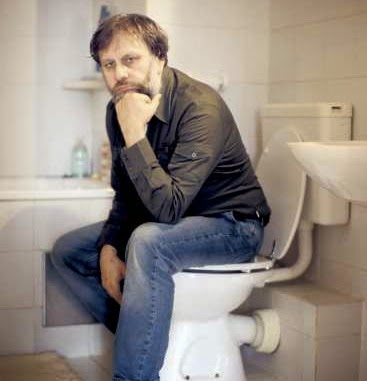 As Schopenhauer once said, probably, the point of knowledge isn’t expanding the consciousness of humanity. What it’s really about is impressing people at parties. As a Wikipediaphile, hooked on easy-readers, Made Simple and For Dummies and all the other forms of McKnowledge, I hold myself as something of an expert on this theme – in fact I could probably do a PhD on the subject. Except that would be beside the point. I’m insufferable enough as it is; imagine what I’d be like if I actually knew something.

What I do know is that all those years of study, learning, academia are a complete waste of time – all you really need to sound clever is to quote someone with a serious sounding name. Someone like Julia Kristeva, or Milan Kandura. Something austere, east-European. Like Slavoj Žižek. Žižek – a kind of updated Jean Paul Sartre played by an ageing David Brent – is today’s hipster philosopher of choice, someone who invites such fawning sycophancy by quasi-intellectuals and quote junkies you’d think he could epitomise the human condition just by breaking wind.
Slavoj Žižek. Go on, try it out. Roll it around your tongue. Sounds good, doesn’t it? If you’re going to quote anyone, quote Žižek. He reaches the questions other philosophers don’t reach. He’s so cool he could turn post-structuralism into a guitar solo – a “rockstar” thinker who narrates documentaries about Freud in modern cinema like he was delivering the Tractatus Logico-Philosophicus instead of talking over a clip of Porkies. Never mind the Marxist theory, just being able to pronounce his name practically qualifies you as a cultural sophisticate.
Needless to say I've never read Slavoj Žižek. How could I? His books are all ten thousand pages long and utterly incomprehensible to a carbon based life form; the prose style exists on a wavelength pitched between somewhere Sigmund Freud and the Higgs Boson and you have to be eighty times cleverer than Gary Kasparov just to make your way through the sleeve notes.
No, let’s face it, nobody has ever read Slavoj Žižek. By all appearances even Slavoj Žižek has never read Slavoj Žižek - or he might have indulged in an arcane process known to lesser writers as “editing” and reduced his 1,300 page books into a punchy 900. But it doesn’t matter. Slavoj Žižek doesn’t exist to be read. He exists to be quoted. The important thing is to read about Slavoj Žižek: to throw Slavoj Žižek-shaped poptarts of information down your gob and roll them around in your mouth before artfully spitting them out again at the right moment.
“Žižek suggests that consciousness is opaque, citing Descartes' problem of the possible automaton in hat and coat,” you can casually throw into the conversation, as you get up to order a packet of nuts. Just memorising five lines from his Wikipedia page can provide enough pretentious waffling fuek to power an entire post-arthouse movie discussion.
And that's the point. To quote, not to know. As we speak, the base of human knowledge is changing. Knowledge is happening faster now. It's getting wider and lighter. Humanity's intellectual heritage is starting to resemble a sort of gigantic, fluffy pancake – a soufflé of feeds, links and listicles, an “ambient” knowledge that’s trivia rich and fuelled by social media. We know a Hell of a lot less about a Hell of a lot more. This isn’t dumbing down. It’s dumbing around.
Just consider the example of Wikipedia. Why ever read anything again when you can have it shoddily summarized by a crowd of poorly-informed amateurs? Why trust boring “encyclopedias” and “experts” when you can trust to hyperlinks, which give every high-level query the feel of a pub quiz?

Philosophers once said that the answer to democracy lay in educating the people. I disagree. I think the answer to democracy lies in making everybody equally stupid. In a world where we can never hope to understand a tenth of a thousandth of a millionth of all there is to know out there, our only defence against info-geddon is edutainment, TED talks, Fast Facts. And quoting Slavoj Žižek. You heard the one about Descartes' problem of the possible automaton in hat and coat?
Posted by Dale Lately at 08:56