Should I get Starbucks to adopt my child? 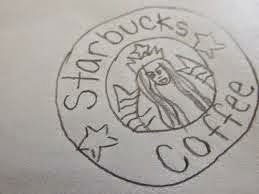 It’s when I look up from my regular filter refill that I see it. It’s on the kiddie shelf, the family-oriented corner of the café with all the picture books to attract young mums and dads doing their parenting over a skinny latte. Amongst the crayons, the Thomas the Tank Engine hardbacks, there it is: a splodge of colour and outline, a precarious schematic suggesting a shape. It is, in other words, a child’s drawing.

Not so very unusual in a crèche area, you might say. In fact there are several such fumbling sketches. But the issue isn’t the draughtsmanship. The issue here is what it depicts. This child’s drawing, as I learn on closer inspection, is a “Mango and Passionfruit Juice Blend”. I know that because it says so, at the bottom. In the same wonky hand. They’ve even included a smiley on the end.

Cute eh? Other such infant talent on display includes the “Chocolate Chip Frapucino (sic)”; the “Iced Cafe Mocha”; the “Classic Hot Chocolate” and, perhaps most perturbing, a piece of Outsider Art entitled “Did You Know? Starbucks Coffee Is The Best!” They’ve even included a charmingly wonky corporate mermaid.

Am I to understand that Starbucks has been employing children to do part of its marketing?

I use the word “employ” only loosely of course; perhaps it was part of some community thing, a kids’ activities day or suchlike. This particular branch of Starbucks also hosts nights for a local non-denominational church (go figure). Or perhaps – and this seems a bit of a stretch – the staff drew them, tongue between teeth, using their left hand, thinking themselves back into a five-year old.

Somehow, this is even more sinister.

At any rate it suggests a breathtaking level of intimacy between the global corporation and the growing child – many of whom will presumably spend their formative years gazing up at inspirational Chocolate Chip Frappucino drawings in the way I used to gaze up at a toy WWI biplane. The general term for all this is “Relationship Marketing” – that is, any attempt to foster a link between company and consumer – but given that these customers are still learning to make vowel sounds, I’d say it was less “marketing” and more a kind of friendly corporate “brainwashing” with overtones of the Soviet Komsomol program. How are kids supposed to develop distinct personalities when they’re taught to associate creativity with drawing a cappuccino?

It’s not just Starbucks of course. Just across the road the Sainsbury’s apes the historic shop window with its “community” notice board, bracketed by a big smiling picture of a copper just to remind the local “community” Not To Try Anything Clever; global retailers don’t just want to replace the high street, they want to be the high street.

I know this because I actually lived in a Starbucks for a while – one inside the Borders store in Islington during the late 2000s. Technically I was domiciled in a flat up the road but since I spent most of my waking life in the cafe (being part of the book store it served as a locum library, breakout room and occasional sleeping area) it was effectively my address – until Borders went out of business.

Brands becoming complete solutions for living is less sci-fi than it sounds. Just look at iLives, the Cult of Apple; look at apartments opening up inside malls, or branded “butchers” and “bakers” inside supermarkets; look at people who struggle to interact outside Facebook, or Google Glass. An MRI study showed that Apple imagery now excites similar neurological responses as religious iconography used to. They say our earliest attachments last from cradle to grave – so Starbucks is working hard to get them in the cradle.

What's the harm, eh? Ahhh: just look at how they love colouring in those cappuccinos.
Posted by Dale Lately at 04:33