"Orange is the New Black"? Rubbish. It's Scrubs with shower rape jokes 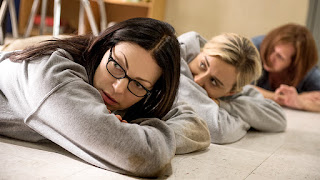 Growing up one of my favourite films was Trainspotting. Wit, snappy cutting, MTV aesthetic: it was heroin as pop video. ‘Just choose life...’ The blu-tacked face peered down from my bedroom wall. If there was anything I aspired to, back then, it was to become a drug addict.


It was a trend that persisted throughout the iconic films of the 1990s. Oldman in Leon, Keitel in Bad Leuitenant, Thurman in Pulp Fiction: charismatic stars taking drugs in designer colours to cool soundtracks. Awesome! It was only later I began to wonder if it really appropriate to film narcotic addiction like you’d shoot the titles for a Blur video. Legalise them or not, drugs do change lives, especially young ones. Had Trainspotting done for drugs what Tarantino did for guns? In other words, should coke and heroin abuse really be made to look cool?


Which brings me onto Orange is the New Black, which has been airing for a while here. It’s the witty gritty tale of a woman imprisoned for a brief contact with a drug dealing girlfriend a decade ago, and it has some good points: it has a bisexual lead, which is good to see; it’s wittily and snappily written, fluidly filmed; it’s entertaining pizza television.


So what’s wrong? And how’s it any different from the rest of the focus-grouped and test-screened U.S. sitcoms, which are generally pretty watchable in a time-wasting kind of way?


Here’s what’s wrong. A series about prison life – about damaged lives, violence, trafficking – doesn’t need to be fun. It doesn’t need to be sassy, or smug, or snarky. Sitcom values aren’t appropriate here. How funny is a colonic strip-search for prisoners who are actually forced to undergo them, rather than the attractive actresses pretending to for a few takes before they waft back to their trailer? Do we really need to raise a smile about starvation, racism, sexual abuse? Do we need this stuff enacted by a shiny cast of mostly beautiful people who help to make prison look kind of fun – Scrubs with shower jokes?


The thing is, I can take twee. I can: I just need it to be quarantined. I need twee to be kept in its own little Twee-hole, cute and pink and curly – and I need it to stay there. When twee embraces social commentary (black people! human rights! prisoner abuse! #WeReallyDoCare) it feels tonally jarring – like a segment on child suicide in Nuts! magazine. I get that this is the kind of class slumming the show is gently mocking – we’re as complicit as the lead character in finding out what prison’s “really” like – but... Well, no. Sorry. Orange is TV wanting to have its cupcake and eat it, to be both thoughtful social commentary and iPod froth at the same time. I don’t buy it.


I’ve been briefly imprisoned myself (only a few hours, for a mistaken arrest, but boy – those few hours really mark you) and had DNA swabs in my mouth and all the other routine invasions of the body modern policing rests on, and let me tell you there’s nothing funny about it. And I was only in there for about three hours. Orange is the New Black is a smart, smug, sassy, snarky, sarky piece of moving wallpaper, but it won’t be going up on my wall. Which makes me also wonder how many prisoners’ll actually get the chance to watch it. Or if they'd want to.