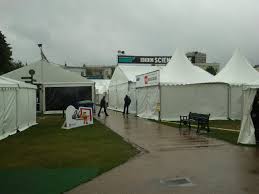 ‘Catch a little downtime and do some important networking,’ said the brochure for the 'Digital Futures' arts festival. ‘Chill out, catch up on important info. Network.’

On a shitty piece of grass, downtime and networking was in full swing: a handful of cold, weary people wandered around a couple of flimsy caravans in the drizzle; ‘Interns’ for the arts festival glanced at their mobiles; a few tragicomic families attempted to look like they were enjoying themselves.

‘There’s a live Twitter feed,’ one of the interns explained to me, pointing to a high tech booth set up in one of the caravans. ‘You can share your tweets.’

I looked at the screen. A couple of people had tweeted all the stuff we weren’t doing to other people somewhere else who weren’t doing anything either. Nobody had replied.

‘Network about what?’ I asked.

He brushed the drizzle from his fringe.

I looked around. ‘What’s happening?’ I said.

There was a long pause before he answered.

One of the caravans was a live GPS updated map that relayed in instant time and by means of colour maps the strength of the Wi-Fi signal around Western Europe.

‘It’s App-enabled,’ the girl said, as she explained it in the empty caravan. ‘You can share it on Facebook.’

She gazed at the map, which was currently displaying interference in the bit-rate around Hamburg.

I glanced at the map. ‘Why would I want to share information about the strength of the Wi-Fi in another country?’ I asked.

It was 6.01, which meant that according to the festival program, ‘downtime and networking’ had just finished. I scanned the shitty piece of grass; actually, I couldn't really tell the difference. Interns for the arts festival glanced at their mobiles with relief; the last tragicomic family had given up trying to look like they were enjoying themselves and had gone home. Nobody had replied to the live Twitter feed. Nobody was doing any networking. It was getting dark.