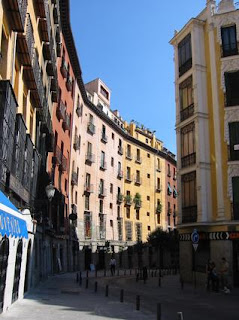 ‘There will be a festival here,’ the mother of my Madrid flat enunciated slowly in Spanish, as if she was teaching me to read. ‘Big festival. Here.’
‘Here?’ I said. ‘On this street?’
‘Yes,’ she agreed, slowly, in a sing-song tone, as if congratulating a toddler on using the potty. ‘Lots of people…’
Part of the problem with learning another language is convincing the people who already speak it that you’re not – in the nicest kind of way – suffering from brain damage. I can forgive the Ecuadorian family I lived with in Madrid for thinking I did. I spoke Spanish like there were rocks in my mouth. I spluttered, gasped for words. I’d aim for a growly Castilian and end up delivering my words like I’d just had a testicle removed. My Spanish was a kind of linguistic version of the My Lai massacre: mangled verbs, subjunctives scrambling to get out of the way…
Needless to say, the entire family, none of whom spoke English, pretty much took me for the kind of gurgling fool who needed his own care-worker. The mother was a loud, generous woman with a voice that reminded me of road-drilling at 7am, and after working about ten hours a day cleaning up offices her reward was to curl up beneath a blanket on the sofa because she'd had to rent out all her rooms to foreigners. Our conversations went a bit like this.

Occasionally they were a little more involved – she might ask me if I wanted some bread to go with my soup, for example – but put it this way, we never quite got around to discussing the implications of austerity measures as a resolution for the debt crisis. The conversation about the festival was the most involved I ever had.
I asked if it was a big festival.’
'Yes,' she replied. ‘Four days.'
She held up four fingers, to help me understand the meaning of ‘four’.
‘Oh.’
I thought I’d push it. I could see what appeared to be a brass band setting up down on the street, so I thought I’d risk a question.
I took the plunge.
‘And will there also be, er…’
… I tailed off.
I had no idea what the word for ‘brass band’ was. I didn’t even know the word for ‘brass’, in fact. I wasn’t even particularly confident that I knew the right word for ‘band’. Could it be ‘bando’?
She was waiting expectantly.
‘…there will be, er…’ I cleared my throat. ‘Instruments of wind?’
Blank, amiable incomprehension.
‘You know,’ I tried again, my confidence draining away. ‘Instruments of… wind?’
My accent may have been a little wobbly. The words may well not have been in the right order. Whatever the problem, she was now looking at me as if she was silently debating whether she needed to fit safety bars on my windows.
Then she took a deep breath.
‘Big festival,’ she repeated, slowly, with gestures. ‘Big.’
You… Don’t… Speak… Spanish.
She smiled encouragingly, as you might to an infant who’d completed their first fridge drawing, and left me to stand there in the rotten, roasting evening, pathetic and helpless, my immigrant words echoing mockingly around my head.
“Instruments of wind”?
I slammed the balcony shut.
Posted by Dale Lately at 16:08